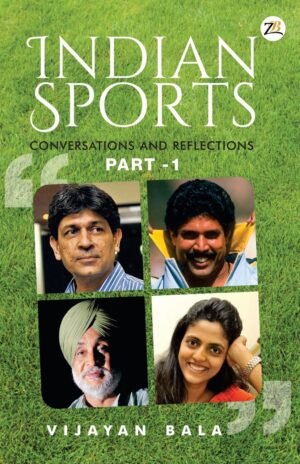 This book contains interviews from all major Indian sports personalities.

Vijayan Bala is a well-known educationist who has also written and broadcast on Sports. Since 1971, he has interviewed many Indian players and some coaches and umpires who have made a name in their respective sports. These interviews tell readers how different Indian sports personalities achieved what they did.

This is what E A S Prasanna, one of the world’s greatest off-spin bowlers the world of cricket has ever seen,had to say about the first edition of this book,’ My hearty congratulations to Vijayan for his incredible effort of putting together interviews of well-known Indian sports personalities which he had taken at different stages of their careers. The book inspires one to read it over and over again as it helps the reader to understand the personalities of the sports persons interviewed. It is a must buy for all sports lovers’.

Mr. Vijayan Bala who was born on 10th October 1951 is basically an educationist who has taught English in reputed schools such as Don Bosco (Park Circus), Modern School, Barakhamba Road, New Delhi and St. Xavier’s Old Delhi, been Vice Principal at the Army Public School, Dhaula Kuan, New Delhi and retired as Prinicipal, Raunaq Public School, Ganaur near Sonepat. In the schools he has worked in he was greatly involved in co-curricular and sports activities. He has been a mentor for English teachers, of Bal Bharati School, Delhi NCR and has also conducted workshops for English teachers in different schools both in Delhi and outside Delhi. He has also written English help books for ICSE and ISC students .
In the field of Sports, he has written freelance from the age of 18 for magazines and newspapers such as INDIAN CRICKET, Sportsweek and Sportsworld.and Hindustan Times and Delhi Press publications. He has been on the statistical committees of the Board of Control for Cricket in India and the Cricket Association of Bengal. He has also written two books on Cricket Statistics published by Vikas, Delhi and Konark, Delhi with forewords by Mr. Vijay Merchant and Nawab of Pataudi (Jr) respectively and a sports quiz book with a foreword by Col. Rathore published by Roli Books, Delhi. He had also brought out two books which were compilations of interviews of famous Indians from the field of Sports. The second book had a foreword by Mr. Abhinav Bindra. He has been a commentator for All India Radio and Doordarshan covering Cricket, Hockey and Football. Apart from covering cricket Tests and ODIs for All India Radio and Doordarshan he also has the distinction of having covered World Cup Cricket for All India Radio and World Cup Hockey for Doordarshan from England. He has also passed the state level umpiring exam held by the Delhi and Districts Cricket Association.

Be the first to review “INDIAN SPORTS: Conversations and Reflections Part 1”