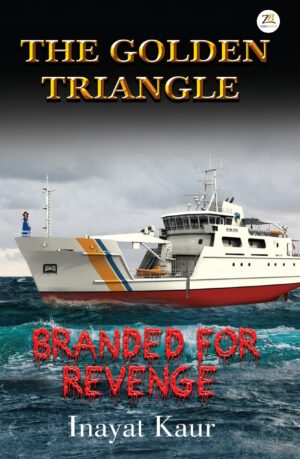 THE GOLDEN TRIANGLE
Branded For Revenge

When Eleanor and William first board the Little Noah, they do not expect to run into each other after years of not having met. Time seems to stand still when they encounter each other, but all is not as well as it seems. They have a history of love, violence, and betrayal. The other passengers include the rich businessman, Mr Farhan Khanna, and the innocent journalist, Mia. Also travelling on the ship are Martin, Oliver and Mary.
Eleanor had been hoping for a quiet vacation but only a couple of days after the ship starts sailing, events take a sinister turn when one of the passengers is found murdered. And not only does the passenger seem to have been murdered quite skilfully, the stabs on his body are mysteriously shaped like a triangle. All the passengers appear to have a motive and everyone is a suspect! Eleanor is asked to take on the case and find the murderer’s identity, but she must race against time and find the murderer before the ship reaches the shore. Martha’s haunting presence further complicates matters. Who is Martha? Does she have anything to do with the events that take place aboard the ship? Will Eleanor be able to solve the mystery? Will she succeed in her mission?

Inayat Kaur Bajaj is a twelve-year-old author from Delhi, India. She studies in the eighth standard in D.P.S. R.K. Puram, New Delhi. This book marks her debut. She has already written two more books which are currently being edited. Inayat is an artist by heart. She has been training in Indian classical vocal music for the last 9 years and continues with this passion. She is also learning western vocal music, Rock and Pop and classical from Trinity College London. She has a keen interest in songwriting and music composition.

4 reviews for The Golden Triangle