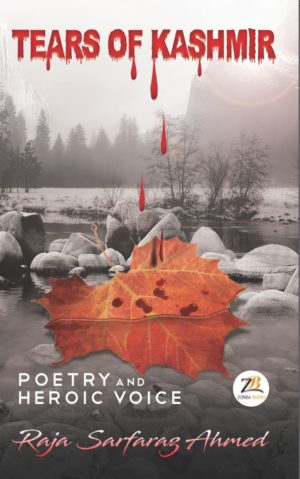 “Kashmir has nationalists like Manto one day nation will find them and bring them back”
The book is a collection of Romantic Poems, Elegy and Epic Satire with modern taste and zest. The book has been highly acknowledged to bring peace, prosperity, and brotherhood back in Kashmir. First priority is to wipe out misguidance and violence from Kashmir with love and mutual understanding. The book is a painful voice of Kashmir who demands to draw serious attention to its lost solace. It is specially important for the youth who are directly and indirectly involved in the turmoil. They must realize that they are missing out the new era of Kashmir and its globalization. “Youth is the future of the country and its very important to encourage the youth so that My Country will be in safe and educated hands always”

The author of this book is Mr. Sarfaraz Ahmed Batt Alias Raja Sarfaraz born in Chinab valley, Jammu and Kashmir. He completed his Graduation from Jammu University where he studied both English and Urdu literature alongside Junior Engineering (Electronic and communication). His interests always lay in literature, which led him to pursue a post-graduation in English literature. He is a working research scholar (PhD) English literature.

He is very passionate about art. He has won millions of hearts from through his acting. His first regional movie “Yeh meri kahani hai damini”, based on Delhi rape case 2012, won critical acclaim. Some of his upcoming projects include “Main Hoon Rajnikant”, “Dust”, “Burhan”, and “Two Faces”. He has also worked in a few serials on national channels and has starred in several Music albums.

Seeing the land in which he was born and brought up, which was once known for its nonviolent nature and beauty being torn apart, he decided to do his part to bring back the lost peace.

Be the first to review “Tears of Kashmir”