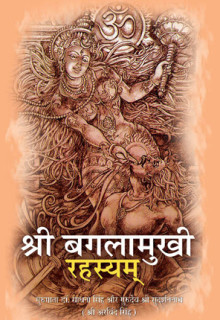 Maa Bagalamukhi is one of the Ten Mahavidhyas and a great guiding light towards self-knowledge. Maa Baglamukhi is the Goddess who eradicates one’s enemy and all the difficulties in a worshipper’s path. All negative actions against the worshipper of Maa Bagalamukhi are removed by the grace of the goddess. The book elucidates the virtues of Mahavidhya Sadhana, which allows one to protect and replenish energy levels from enemies; known and unknown. Every deity has a raksha kawach (which means armor) and every deity utilizes Maa Bagalamukhi’s energy for a kawach. Mahavidhyas are a source of all energy as these are detailed with all sorts of weapons, armors, arms and armaments. Worship of Maa Bagalamukhi is a complete science. The Goddess is a part of Shree Vidhya Kula. Any follower who worships Maa Bagalamukhi develops a protective inner power within himself or herself.

Be the first to review “Shri Bagalamukhi Rahasyam”