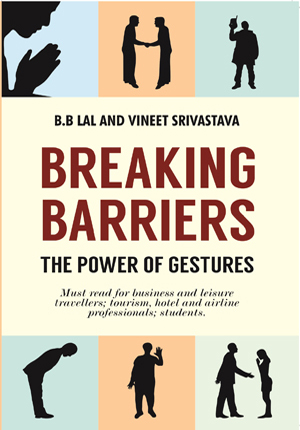 Breaking Barriers – The Power of Gestures

This book, the first of its kind, presents a bouquet of greetings in 24 Indian languages and 16 foreign languages, all vetted by native speakers. Also included are 19 gestures of salutation used in day-to-day lives.

Greeting gestures and salutations are an integral part of all societies. They are used to express respect, admiration, devotion, good wishes and blessings towards relatives, friends, dignitaries, business partners, co-workers, seniors, subordinates, or even to complete strangers.

B. B. Lal was born in 1944 in district Fatehpur in the state of Uttar Pradesh

As an officer from the Indian Telecom Service, his job took him to different parts of India, and he regularly interacted with people from different states. In 2001, he was posted in Nagaland as the General Manager, Telecommunications, where his job demanded frequent visits to Manipur, Arunachal Pradesh, Meghalaya and Assam.

He visited Japan in 1981 in 1990 and 1991, he visited Afghanistan on a UN assignment. The author had a good opportunity to interact with many nationals, who were working as UN experts in different areas. Between 1996 and 2001, in Tanzania, Madagascar and Mozambique.

Stayed in Singapore in 2001 and again in 2004. Visited Thailand and Malaysia during the same period and got acquainted with their lingua franca. His visits to Europe in 2006, and to Egypt in 2008 further added colours to his urge for learning at least few words of various other languages.

He retired from the Department of Telecommunications as a General Manager in 2004, with his last posting at Lucknow. This is his second book.

His first book regarding his experiences of life, Dada Aao Yahan Bahut Gulgula Hai, was published in 2010 and has been widely applauded.

His co-author, Vineet, has a Masters in Engineering from the National University of Singapore. Vineet is presently working for a US-based multinational corporation. Vineet went to Singapore at a very young age, on a fully paid international scholarship, to pursue pre-university studies in 1992.

Vineet’s work in the semiconductor and telecommunications field has taken him to several countries like the USA, Japan, Korea, Hong Kong and Indonesia and has routinely given him opportunities to interact with people from different countries and ethnic backgrounds. He has also visited Egypt, Tanzania and Madagascar. Vineet is passionate about languages. He has learned Mandarin Chinese and is comfortable striking conversations in the language. He has picked up bits of Japanese, Korean, Swahili, Thai and French and Telugu. For the past several years, Vineet has been living in Bengaluru and, as before, has picked up the local language, Kannada, to a conversational fluency.

Be the first to review “Breaking Barriers – The Power of Gestures”