Why People Fail - through the eyes of Shakespeare and Sumantra Ghoshal - ZorbaBooks
Sale! 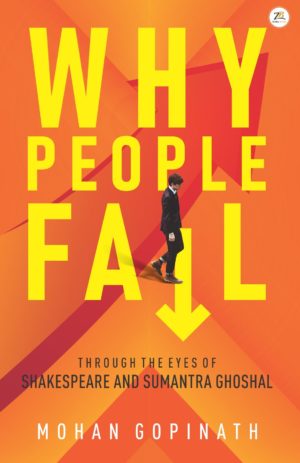 Why People Fail – through the eyes of Shakespeare and Sumantra Ghoshal

‘There is nothing more difficult to take in hand, more perilous to conduct, or more uncertain in its success, than
to take the lead in the introduction of a new order of things’.   —-   Niccolo Machiavelli

This book on management, Why People Fail, the third in the series which you are now holding in your hands, leans on Sumantra Ghoshal and the Bard. It looks at some of the lessons which Sumantra Ghoshal and the Bard brought out, about the management of change – change at the individual and a wider level. I have linked five Shakespearean characters with what Professor  Sumantra Ghoshal wrote in his paper ‘The Smell of the Place’. This book on management, links the distant Shakespearean past with a current management concept and examines the nature of the lessons which can be pulled out. Living through change can be both a frightening and an exhilarating process.
Very often there are no guidelines on which we can rely on to guide us through the trials and tribulations of change. We have to rely on our own intelligence and experience. I have experienced this in my career spanning five industries and so would you, the reader, i hope you will greatly benefit from this management book.

Dr. Mohan Gopinath holds a BA (Hons.) degree and a Master’s degree in English Literature from St. Stephen’s College–Delhi University, where he later joined as a member of the faculty. In between, he joined the Indian Police Service which he quit after one week. After the two year stint in the college, Dr. Gopinath joined the Hongkong and Shanghai Banking Corporation, and worked as a senior level banker for almost 21 years in India, UK and Hong Kong, after initially completing a two year training attachment in the London branch of the bank. Subsequently he left the industry, and worked for a doctoral degree which he obtained from Osmania University on the topic, Organizational Learning (in the banking industry). His career in HSBC also included an attachment to the all India HR function.
After obtaining his doctoral degree, Dr. Gopinath worked as a management consultant in India and the Middle East. Dr. Gopinath has also worked as a lead consultant for a World Bank funded Institutional Development Study conducted for the Andhra Pradesh Forest Department.

Dr. Gopinath reverted to academia after working as a consultant for more than one decade, and joined as the Dean of the St. Joseph’s College of Business Administration, Bangalore. He later shifted to the Alliance University’s School of Business, Bangalore, where he now works as a Professor in the Department of OB and HR. His areas of interest are leadership, management of change, conflict resolution, banking and protection of the environment. He is also a keen tennis enthusiast.

He has presented and published papers in national and international conferences/ journals in his areas of
specialization as well as on aspects of Indian dance and music. He has conducted Management Development Programs for senior managers in his areas of specialization in the organizational development area in India and the Middle East. He has written many books on management, including one (co-authored) titled ‘Business Drama: How Shakespearean Insights Help Leaders Manage Volatile Contexts’. His interest in Kathakali led him to write ‘The Actor Who Could Connect: the Genius of Kalamandalam Krishnan Nair’ (Kathakali actor). This book was selected by the American Library of Congress for inclusion in their data base, and was also exhibited at the Paris World Book Fair in March 2019. He has also written a James Bond novel, which because of copyright restrictions, is for private circulation only.
He can be contacted on chinnam.gopinath@gmail.com

Other Books Written by Mohan Gopinath
Leadership Nuances in Shakespeare’s Plays
Double Oh Seven
(for private circulation only)
The Actor Who Could Connect:
the Genius of Kalamandalam Krishnan Nair’
Fiction (novel) – ‘The Intruder – a Nocturnal Interlude’, Zorba Books, August 2015
Memoir – “Does the Spearmint Lose its Flavor
on the Bedpost Overnight”
‘Business Drama: How Shakespearean insights help leaders manage volatile contexts’,
with Debashish Sengupta and Ray Titus