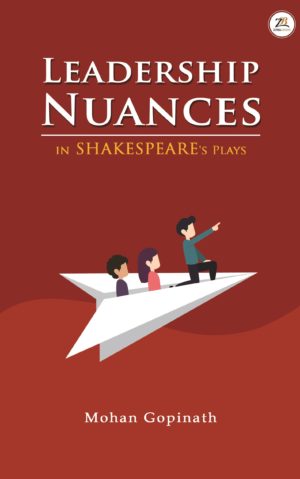 The book you are reading now focuses on leadership, including contextual leadership and nuances in shakespeares plays that relate to leadership. If we look at it from a broad perspective, the world is going through a leadership crisis in many critical areas where this, i.e. high quality leadership is in fact most in need. Whether it is the government, business or politics, we seem to be going through a phase where we sometimes appear to be lurching from one crisis to another. Can anything be done about this? The unfortunate answer is – not in the immediate future. And there are no immediate solutions.

This book is a sequel to an earlier book ‘Business Drama: How Shakespearean Insights Help Leaders Manage Volatile Contexts’, which came out in April 2014 and was published by Zorba Publishers Pvt.Ltd. It was co-authored with Dr. Ray Titus and Dr. Debashish Sengupta. The first book focused on broad organizational issues covering a wide range and linked them to the appropriate incidents/ stand taken by characters in the plays. Subsequently, it analyzed what were the learnings we could get from the plays, nuances in shakespeares plays and whether it could be applied in present day organizations.

What perhaps can be done however is that we can see if we can look over our shoulders to the past in order to improve our future. The vision for this book is firmly rooted in this premise and its philosophy is grounded in the infinite lessons which can be pulled by corporates and people working in other areas (it is immaterial whether they are in leadership positions) from the plays of Shakespeare, and more specifically, the lessons in leadership which are embodied in the plays.

Dr. Mohan Gopinath holds a BA (Hons.) degree and a Master’s degree in English Literature from St.Stephen’s College – Delhi University, where he later joined as a member of the faculty. In between, he joined the Indian Police Service which he quit after one week. After the two year stint in the college, Dr.Gopinath joined the Hongkong and Shanghai Banking Corporation, and worked as a senior level banker for almost 21 years in India, UK and Hong Kong, after initially completing a two year training attachment in the London branch of the bank. Subsequently he left the industry, and worked for a doctoral degree which he obtained from Osmania University on the topic, Organizational Learning (in the banking industry). His career in HSBC also included an attachment to the all India HR function.
After obtaining his doctoral degree, Dr. Gopinath worked as a management consultant in India and the Middle East. Dr. Gopinath has also worked as a lead consultant for a World Bank funded Institutional Development Study conducted for the Andhra Pradesh Forest Department.
Dr. Gopinath reverted to academia after working as a consultant for more than one decade, and joined as the Dean of the St. Joseph’s College of Business Administration, Bangalore. He later shifted to the Alliance University’s School of Business, Bangalore, where he now works as a Professor in the Department of OB and HR. His areas of interest are leadership, management of change, conflict resolution, banking and protection of the environment. He is also a keen tennis enthusiast.
He has presented and published papers in national and international conferences/ journals in his areas of specialization as well as on aspects of Indian dance and music. He has conducted Management Development Programs for senior managers in his areas of specialization in the organizational development area in India and the Middle East. He has published four books, including one (co-authored) titled ‘Business Drama: How Shakespearean Insights Help Leaders Manage Volatile Contexts’.
His interest in Kathakali led him to write ‘The Actor Who Could Connect: the Genius of Kalamandalam Krishnan Nair’ (Kathakali actor). He has also written a James Bond novel, which because of copyright restrictions, is for private circulation only. He can be contacted on chinnam.gopinath@gmail.com

Be the first to review “Leadership Nuances in Shakespeare’s plays”