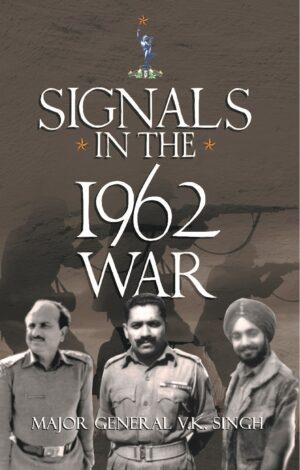 This book deals with the role of the Corps of Signals of the Indian Army during the Sino-Indian War of 1962. Based on their personal experiences, excellent accounts have been written by two Signals officers, Major General KK Tewari and Brigadier Lakshman Singh. However these cover mainly the operations in the Kameng Frontier Division of NEFA. The operations in the Walong Sector and Ladakh do not form part of their narratives. The official history of the Corps of Signals also does not cover these operations. This book aims to fill this gap and acquaint the public and the present generation of signallers with the achievements of their forebears, who had worked under trying circumstances to provide communications in 1962, many of them sacrificing their lives.

Major General VK Singh’s varied interests include adventure sports, military history and journalism. A regular contributor to magazines and journals, many of his short stories and poems were published in the Illustrated Weekly, Filmfare, Femina and Eve’s Weekly in the seventies and eighties. In later years he took to professional writing and has authored six books. His previous books are Through – Saga of the Corps of Signals (2001); Leadership in the Indian Army – Biographies of Twelve Soldiers, (2005); History of the Corps of Signals, Volume II, (2006); India’s External Intelligence – Secrets of the Research and Analysis Wing (RAW) in 2007; Contribution of the Armed Forces to the Freedom Movement in India (2009); and History of the Corps of Signals, Volume III (2014). His seventh book, Protocol and Etiquette in India, is presently under print.