We Think Therefore We Are - ZorbaBooks 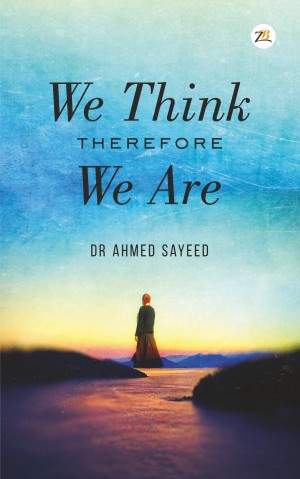 We Think Therefore We Are

In the “Chain of Being” Humans are in a Superior Position. Man consists of Mind, Body and Soul as described in all Monotheistic religions. It is an incessant struggle for survival. It is a sinister world where everyone “fights” each other, survival of the fittest does not mean fighting better or making more money or dominating others. It refers solely to reproductive fitness. In other words which ever group or individual produces more successfully is most fit. Human beings struggle for existence in the natural world showed that the determining factors of life are CHANCE and NECESSITY.

It undermines the value of traditional religion and morality, which has been accepted for centuries as guiding principle of Mankind. Even today, in the days of advanced science and Technology 90 percent of humans follow the same principle. From Charles Darwin to recent Science confirm that no God was necessary to create man. New Anthropocentrism has deprived man of his of his unique position in the world HOMO-SAPIAN is the only species which developed various norms of culture and ethical systems. Paradoxically, the development of human society was an attempt to escape from the process of natural selection. Human beings created SOCIAL SYSTEM IN ORDER TO PROTECT THEMSELVES FROM THE UNCONTROLLABLE FORCES OF NATURE
Lack of wisdom made humans biased, prejudiced and malignant, this is causing perennial conflicts, clashes, killing has become a regular feature. Hence I have suggested Universal Strong Governance for sustenance of social life without clashes since all the humans are equal in the eyes of Mother Nature. It will cultivate HUMANITY and wipe out Terrorism. Enlightenment of individual is important factor to adopt humanitarian ideology.

Mr Ahmed Sayeed did his MA in philosophy. He has worked as an Officer in the office of Principal Accountant General, Andhra Pradesh. After his retirement he did LLB ad PhD. He is has an inclination to write books. During M.A. studies he wrote about NON-VIOLENCE for which I was awarded. So far, after retirement he has penned four books “Human Life-a Philosophical Audit, Know Your India-and open A new page for Nationalism. After all Whose Life is it any Way? And finally Tears of Terrorism. He has two more books in the offing which are about “The Days of Humanity is numbered and Are You to Corruption? He believes in humanity and humanity is his religion and his God is NATURE. He believes in a simple way of life. If we adopt simple life there will not be the “word Poverty”