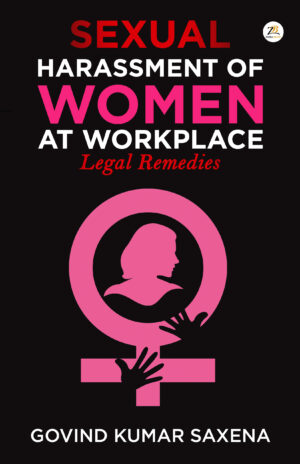 The book Sexual Harassment of Women at Workplace: Legal Remedies; presents laws, mechanism and remedies for cases of sexual harassment of women available under the current Indian laws, particularly under the Sexual Harassment of Women at Workplace (Prevention, Prohibition and Redressal) Act, 2013.
It is no secret that during the Coronavirus pandemic during the year 2020, media was abuzz with reports of sexual harassment of women confined with their relatives in far off places. In our country, women,
despite having constitutional guarantees such as equality of status and opportunity, have been subjected to various forms of physical (sexual) and psychological harassment at their workplaces and in their homes. The book includes instances in which women have faced sexual harassment at their workplace but did not raise their voice due to a lack of awareness about the provisions in Indian laws. In modern societies, women must become aware of the rights and legal remedies available to them in matters of sexual harassment. The book lucidly deals with many micro-topics related to the said Act. It contains media clippings about #metoo movement, commentary on applicable provisions of laws, frequently
asked questions and the latest case laws on sexual harassment spread across eight chapters, a special supplement and five appendices.

Govind Kumar Saxena is a lawyer at Allahabad High Court. He has a penchant for creating legal awareness and providing legal aid to the needy and the underprivileged sections of society. His untiring efforts to raise awareness on various socio-economic issues have earned him appreciations from across society.

He has received the ‘Vidhik Sewa Prashasti Patra’ from Madhya Pradesh State Legal Service Authority, Jabalpur, honoured by the Institute of Human Rights, Colombo (Sri Lanka) for his humanistic efforts and has received a National SMILE Matrimonial Behaviour Management Award from SMILE, (a Delhi based NGO) for free counselling to parties engaged in matrimonial disputes, ‘Prayag Gaurav Samman-2010 in Allahabad for providing paralegal services to the underprivileged students, Gangadoot Samman-2011; from Uttar Pradesh Asangathit Karmakar Union, Allahabad for spreading awareness amongst people about advantages/ importance of a clean Ganga, NIFT Award-2011 from North Indian Films and Television Society (Allahabad Chapter), Mumbai for contribution in spreading awareness about pollution-free river Ganga through public lectures, ‘Sahitya Setu Samman, 2013 for spreading awareness about Hindi literature, and ‘Sri Baljit Shastri Award for The Best in Human and Traditional Values’ by the Amity University, Haryana for promoting human and traditional values in society.

Be the first to review “SEXUAL HARASSMENT OF WOMEN AT WORKPLACE: LEGAL REMEDIES”