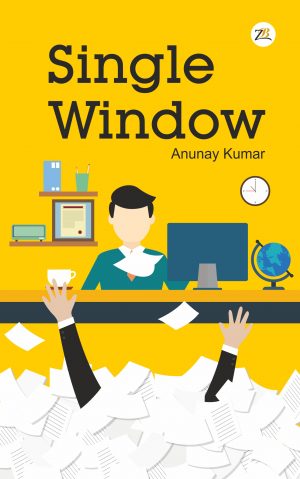 When top industrialist P jets in with his corporate team to start a new mining business, he believes he is well-versed in the ways of the government and leaves his trusty Man Friday Ola to see the project through. After all the Government has declared itself “pro-development” and promised a “single window” clearance for all job-creating projects. And so we set off with the hapless Ola, negotiating his way through the byzantine corridors of bureaucracy and politics, encountering wily politicians, all-powerful PA’s, wildlife officials, researchers and hired hooligans.
This engaging and darkly humorous satire spares no one – activist, journalist or peon, and while we chuckle we also nod along, recognizing the sad truth that the promised ’ Single Window’ is just an illusion of light in the corridors of power.

The author was born in an affluent doctors family.He led a typical Indian dream life with education in Engineering and Management, training abroad, experience in India and abroad, travelled widely, and career culminated in several board level placements.
He is happily married since long and has a son and a daughter who along with their spouses are doing extremely well.