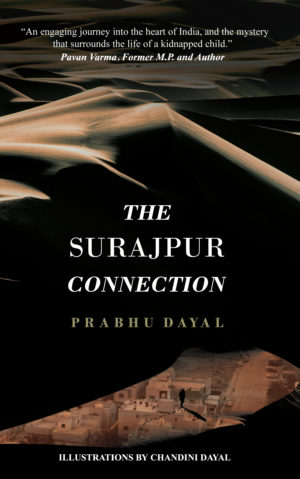 Ram Singh Chaudhary does not stand for elections because he has something bigger in mind, or rather in his heart. After years of pills, prayers and pilgrimages, he and his wife finally have a son – a bundle of joy called Sonu.
When Sonu goes missing one afternoon, it creates shock waves in the Chaudhary household, in Chandrapur and in the country. How could a four-year old vanish in broad daylight– literally from the arms of his doting parents? Why is there no demand for ransom?

Little Sonu wakes up on a boat on the high seas, unaware that his life will never be the same again. Will this much -loved little boy, who thinks that his father’s name is Babuji– ever find his way back home?
The Surajpur Connection is the riveting story of Sonu’s extraordinary journey, as he struggles to keep the promise he makes to himself: “One day I will make my way home and find my parents”

Prabhu Dayal is the autghor of the bestselling book Karachi Halwa. Ambassador Prabhu Dayal is an illustrious officer of the Indian Foreign Service with a career spanning 37 years. He served in various diplomatic positions in Egypt, Pakistan, Iran and the Permanent Mission to the UN at Geneva before being appointed as Consul General, Dubai in 1994. This was followed by his appointment as Ambassador to Kuwait (1998-2001) and to Morocco (2004-2008). He also served as Deputy Secretary (Pakistan) and later as Joint Secretary (SAARC).

He was Consul General, New York from 2008 until his retirement in 2013—ranking next in seniority to the Ambassador. From the magnificent heritage building in Manhattan which houses the Consulate General of India, he handled matters relating to 10 US States–New York , New Jersey, Pennsylvania, Ohio, Connecticut, Rhode Island, Massachusetts, Vermont, Maine, New Hampshire. His jurisdiction also included Puerto Rico and the US Virgin Islands.

Having been a student of International Relations at the University of Allahabad, it was perhaps natural for him to opt for the Foreign Service when he stood 2nd in the Order of Merit in the Civil Services Examination. “Nation states have always engaged in warfare and diplomacy” he says, adding “the world needs skilful diplomats more than ever before in history”. He puts his rich experience and intellectual abilities to good use in his book—’The Surajpur Connection.’

‘Prabhu Dayal’s novella, The Surajpur Connection, is written with verve and spirit, that takes the reader though an effortless but engaging journey into the heart of India, and the mystery that surrounds the life of a kidnapped
child. It is also a serious indictment of the issue of child kidnapping, and the syndicate that operates it. I thoroughly enjoyed reading the book.’
Pavan Varma
Former M.P. and Author

‘I have always known my childhood friend Prabhu Dayal to be a gifted writer. In his book’ The Surajpur Connection’, he draws on some of his experiences from the Gulf Arab countries where he has served for many years and offers the reader an unputdownable masterpiece. Written in an elegant style, it is recommended reading for young and old alike’.
Vivek Katju
Former Ambassador and Secretary, Ministry of External Affairs

‘Ambassador Prabhu Dayal is an accomplished diplomat and a master story teller. “The Surajpur Connection”, is a gripping trans-cultural and trans-national tale of a boy born into a family of wealthy landlords. Grappling with some troublesome and traumatising issues, it takes you to the heartland of India; it is a thriller that engages the reader while also asking some deeper questions. Strongly recommended, the book promises to be a riveting read’.
Saurabh Shukla
Author, Founder and Editor in Chief
NewsMobile

In his new book ‘The Surajpur Connection’, Ambassador Prabhu Dayal, author of the best-selling book ‘Karachi Halwa’ weaves a tale of many strands, some happy, some sad. Many twists and turns await the reader,who is constantly intrigued by the question: Will the journey of the child across time and nations end in triumph or tragedy?
Niraj Srivastava
Former Ambassador

Be the first to review “THE SURAJPUR CONNECTION”