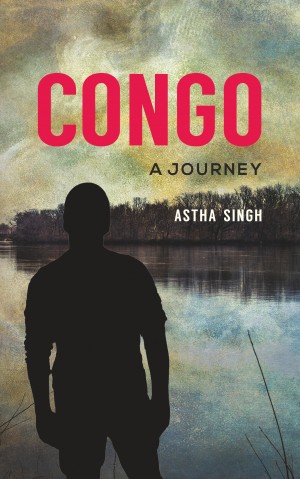 Set in the turbulent backdrop of Kinshasa, ‘Congo – A Journey’ is a story of Ramesh’s tumultuous ascent to Manikchand Seth, big boss. Ramesh, a young man from Gujarat could never adjust to a life of squalor and anonymity. As Democratic Republic of Congo struggles with political strife, coup d’états and economic crisis, Ramesh is consumed by the destructive desire to become rich. He closely watches the charmed world of sparkling champagne, glittering diamonds and exotic women.
‘He lazily appraises the vast expanse of the Congo River and aspires to be the king of the river port. “I will show those monied bastards” “One day I will be rich… I don’t know how, but I will be rich!”

March 2006. Kinshasa is burning. The city witnesses the most horrible attempted coup d’états by Vice President Jean Pierre Bemba. As it rains bullets and the city succumbs, the coup paves way for Ramesh’s meteoric rise to Seth Manikchand.
It is a compelling, funny and poignant debut by the author, set in Kinshasa, a rich, teeming, squalid city by the River Congo, fraught with staggering contradictions, thriving on monstrous disparities. The story is a vivid portrayal of lust, revenge, voodoo and prison agonies in Ramesh’s life in Congo. His story is overpowering, exhausting, violent and chaotic.

The author follows lives of expat wives, prostitutes, businessmen, Juju (voodoo) men and warlords. From the society wife who finds solace in her Chanel pearls to a poor migrant’s feisty wife who runs a beauty parlor to the rich Indian Belgian who sneaks two bidis with his café noir and croissants. Ramesh’s wife embraces a new religion to seek solace…

And …one man searches for himself in the city…

A graduate in English Literature from the prestigious Lady Shri Ram College for Women, Delhi University. Singh worked as a journalist with The Pioneer before moving to Cameroon. She wrote various Africa based columns in The Pioneer from Cameroun. She has taught English Literature in different International Schools in Democratic Republic of Congo, Ivory Coast and Ghana. Singh has lived in many cities of West Africa including Yaounde, Baffusam, Nkongsamba, Doula in Cameroun. Kinshasa, Democratic Republic of Congo and Abidjan, Ivory Coast . She currently lives in Accra, Ghana with her husband and two children.