Voices of the Muse - ZorbaBooks 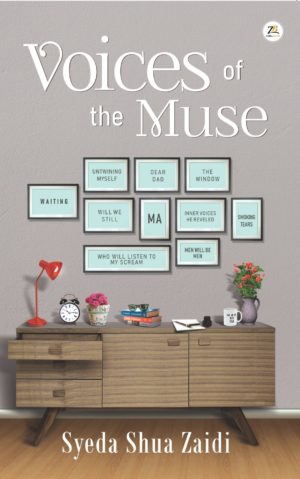 Voices of the Muse

Voices of the Muse is not meant to be one sophisticated piece of art, it ought to manifests the little things in life, glistening upon us just like life smiles on all absurdities with equal faith. Each poem encompasses within itself a fire to be lit and a few million stories to be unfolded. It is the little things in life, and every ounce of ones emotion is like an intrinsic chunk of their existence.

‘Smiling Tears’, as the name suggests places your heart in a zone wherein the child within you never dies, and you are cognizant of his immortality as you are aware of its well-being throughout this ride called life. ‘Ma’ might seem to you as a very mainstream title, yet it carries with itself a sense of love, and only eternal love weaving the fabric of motherhood, the purest of all relations. Through ‘Dear Dad’, I sought to deliver all of my unsaid emotions I have longed to express to my father, and in a world where everyone agrees that mothers are special, I believe fathers; are no less. ‘The Window’ exhibits the hard days glee of someone who cannot be controlled by blindness. Lieutenant Bisht resides on the hopes that exists within him, and he is not weary as every night, as the stars sit beside him, he is always Waiting. ‘Men will be Men;’ defies all the orthodox viewpoints and aims to propagate individuality. ‘Untwining Myself’ is just my phase of life. It is what I have cherished, to say, and let all my heart out to the world as it beholds. ‘Will We Still’ is based upon E.R. Braithwaite heart throbbing To Sir, With Love and is indeed the culmination of the soul and the heart. ‘Who will listen to my Scream’ brings about the screams of a woman, bounded by the clutches of acid attacks, whose whispers are unheard, and shrieks are muted. ‘Inner voice He Revealed’ glorifies the voice of the soul which is the guide to all hardships and an amalgamation of the heart benignity, and showcases the Inner soul liveliness.

Born in Aligarh, (Uttar Pradesh) in 2005, Syeda Shua Zaidi is a student of class VIII in Bluebells School  International , New Delhi. She is the recipient of a gold medal for her distinctive performance in National Science Olympiad, 2013. She was awarded Student of the Year Award for consecutive years (2012, 2013). She was awarded certificate of Achievement for Exemplary Performance in Mind Spark, 2013-2014. She secured first position in the Art Competition Arty Ideas and second position in Story Telling Competition, Super Kid Organized by Bluebells School International , 2011. She successfully completed Helen O Grady International Drama Programme, Bluebells School International, 2012-2013. Besides she has participated in various academic and as well as cultural programmes. She authored one book The Famous Ballet Show published by Zorba Books. She completed writing this book on June, 2014 when she was only 9 years old. Shua is recipient of the ‘Best Artist of the Year’ 2015. She secured first position at ENIAC’15, Bluebells School International  and second position at Gyan Bharti School in a Computer Competition 2016. She has actively participated in various interschool debates, book discussions, art and computer competitions. She has been the Scholar of the Bluebells  School International  for five consecutive years.

Be the first to review “Voices of the Muse”