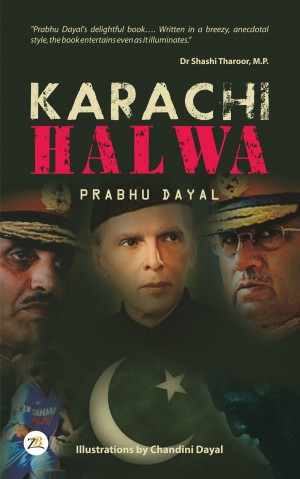 Why would Zia want to climb five floors of a hotel? Why did someone think Zia could fix his TV? Was Zia practicing urine therapy? What did Christopher Lee and Alyque Padamsee have in common?

KARACHI HALWA, the book, is a witty but insightful portrayal of Zia ul Haq’s rule in Pakistan. Ambassador Prabhu Dayal shares his recollections of that period and tickles your funny bone. Throughout his account of the bumpy ride of Pakistan’s domestic politics and its relationship with India. He tells you how a Sahiwal cow was brought into the equation, and where an elephant comes in.

He says, ‘The past, the present and the future are in one continuous motion. Whatever I witnessed in Pakistan during Zia’s rule extends its long shadow not only over the present times but will do so well into the future also’. He poses the ultimate question whether the two South Asian giants can live as friends, offering his own suggestions, in Karachi Halwa, a book.

Karachi Halwa, the book has received rave reviews from media in India and abroad also authors like Shashi Tharoor, C Parthasarthy and more. It that rare book that combines insight into Pakistan’s Zia-ul-Haq rule, humour and information.

Ambassador Prabhu Dayal is an illustrious officer of the Indian Foreign Service with a career spanning 37 years. He served in various diplomatic positions in Egypt, Pakistan, Iran and the Permanent Mission to the UN at Geneva before being appointed as Consul General, Dubai in 1994. This was followed by his appointment as Ambassador to Kuwait (1998-2001) and to Morocco (2004-2008). He also served as Deputy Secretary (Pakistan) and later as Joint Secretary (SAARC).

He was Consul General, New York from 2008 until his retirement in 2013—ranking next in seniority to the Ambassador. From the magnificent heritage building in Manhattan which houses the Consulate General of India, he handled matters relating to 10 US States–New York , New Jersey, Pennsylvania, Ohio, Connecticut, Rhode Island, Massachusetts, Vermont, Maine, New Hampshire. His jurisdiction also included Puerto Rico and the US Virgin Islands.

Having been a student of International Relations at the University of Allahabad, it was perhaps natural for him to opt for the Foreign Service when he stood 2nd in the Order of Merit in the Civil Services Examination. “Nation states have always engaged in warfare and diplomacy” he says, adding “the world needs skilful diplomats more than ever before in history”. He puts his rich experience and intellectual abilities to good use in his book—Karachi Halwa.’

His second book a nouvella, The Surajpur Connection,  is now available on all online stores