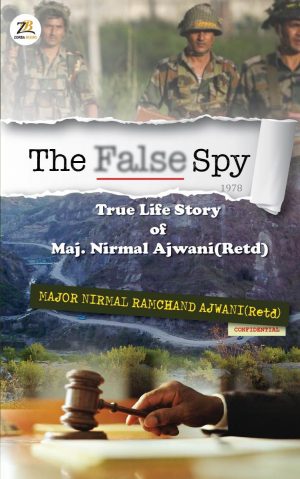 Between August 1978 and January 1979, in a brief span of six months, 50-odd army persons were arrested by the Military Intelligence authorities under the charge of spying for Pakistan in what eventually came to be known as the ‘Samba Spy Scandal’.
What followed was nothing less than a humiliating debacle of justice in one of the most sordid dramas of greed, intrigues, cowardice and fabrication, as the judicial bodies were plunged into a see-saw between the preposterous claims made by the MI authorities and the facts stated by the accounts of the many soldiers who were framed in this scenario.

When Major Ajwani joined the army in 1964, he had the same rosy picture of the organization being the epitome of bravery, loyalty, discipline and flawless conduct that is embedded in the minds of most Indians. The author leads us by the hand through his very first days in the army, the initial tokens of success, soon to be overshadowed by the rude awakening to the rampant corruption and deception prevalent in the organization. Almost four decades later he recounts, in an eye-opening first-hand account, the unimaginable isolation and sense of ignominy faced by those who were falsely implicated.

The book is a sincere product of years spent on careful study and documenting of the case from an insider’s perspective and exposes the pitfalls of the intra-court system and the incompetence of the army courts in handling such a case with sense and sensitivity. Major Ajwani argues with the aid of nuanced details, bolstering his arguments with hardcore facts, and a steadfast sense of responsibility towards extracting justice for each soldier who had been wronged by the juggernaut of betrayal and deceit set up by the MI authorities. It leaves the reader with a “brooding sense of injustice” and implores that one must keep speaking up against injustice in order to let the generations know, and never forget, that justice had been miscarried.

Major Ajwani belongs to a Sindhi Family from Hyderabad, Sindh, now in Pakistan. His entire family migrated to Ahmadabad in January 1948 and settled down there.
After obtaining a degree each in B. Com and LL.B from Gujarat University, Major Ajwani joined Sales Tax Deptt as an Inspector in 1959. In 1964, he joined Indian Military Academy at Dehradun for grant of Emergency Commission in the Army from where he passed out as a 2nd Lt. on 04/10/1964 in the Regiment of Artillery.
After taking part in Indo Pak war in 1965, he was transferred to the legal branch at Bengal Area, Calcutta in March 1968. In December 1970 he was transferred to the Judge Advocate General’s branch and transferred to HQ Western Command Shiwla as a Judge Advocate (with Major’s rank).
After having served as a Judge Advocate up to March 1980, he was released from service.
After his release from Army, Major Ajwani started his own venture as a Security Service Contractor in 1980 which he is running even today.
He is married to Mandakini and has a son and a daughter (Ashish & Gayatri)who are happily married.

1 review for The False Spy