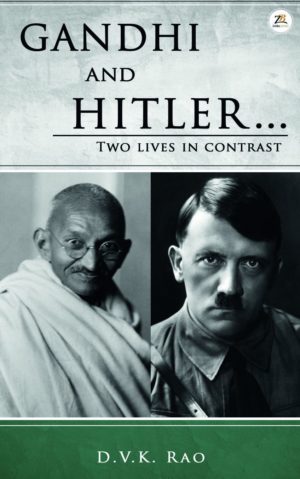 The lives of Gandhi and Hitler make for a fascinating study. However, there is a sharp contrast in the lives of both these personalities. Gandhi, the Mahatma (Great Soul) was a firm believer in truth and non-violence—Hitler, the Fuehrer (Leader) had no use for either. While Gandhi led India to its freedom—Hitler led Germany to its ruin. India’s freedom movement is unthinkable without Gandhi—Second World War is unimaginable without Hitler. The memory of Gandhi lives on while Hitler’s is evoked with fear.
How this happened is well-encapsulated in Gandhi and Hitler with a remarkable simplicity and unity of purpose.

ABOUT THE AUTHOR
D.V.K. Rao graduated from St. Stephen’s College (Delhi) and joined Indian Ordnance Factories Service (IOFS) following his selection through IAS (exam), 1974. He retired as Member of the Apex Ordnance Factory Board in 2011. He has authored three books covering the papers of Civil Services (Mains) exam. He has written another book on ‘Indian Economy,’ which is now under publication.