Politicisation of Caste Relations in a Princely State - ZorbaBooks 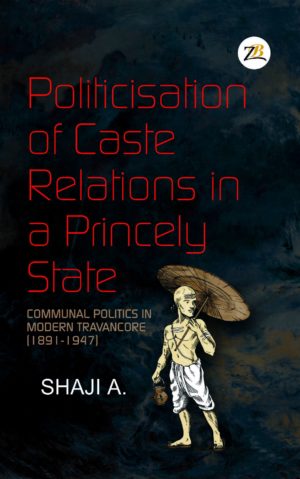 Politicisation of Caste Relations in a Princely State

Politicisation of Caste Relations in a Princely State: Communal Politics in Modern Travencore (1891-1947)

Among the various factors that contributed for the progressive transformation of Kerala into a modern democratic society, politicization of caste played a very crucial role.
Travancore which formed part of present day Kerala before integration witnessed socio-political movements in the modern period initiated by the principal communities. The net result of these movements was the transformation of pyramidal social structure into pillar social structure. It was achieved through incessant conflicts and assertions and from the position of caste victims some communities could elevate themselves to the makers of their own destinies. They transformed the society from change resistant sacred outlook to change ready secular outlook. The shift of this change was from caste hierarchical structure to inter-personal relations.

In Modern Travancore, social movements like Vaikom Satyagraha leaders through protest aimed not only social change but also change in political sphere. The caste played a crucial role in the transformation of traditional society into modern society. In the traditional society the status of an individual was fixed. Children learn to act according to the established norms and deviations were punished. But with the influence of modern ideas the younger generations tend to become dissatisfied with the traditional society and readily accepted the new values. These values reflected the caste relations as well. In the changed situation the dominant caste groups played a catalytic role in social change. S.N.D.P and the Sree Narayana movement was a typical movement which experimented all these way of struggle. Political participation of the community can be seen in the movements like Malayali memorial agitation, Ezhava memorial, Civic Rights movement, Nivarthana agitation and struggle for responsible government. Conversion movement was effectively executed through actual conversion and the threat of conversion. The present work aims to unravel the phases of transformation of Modern Travancore into a democratic society through the politicization of caste relations.

Dr. Shaji A is currently working as Faculty Member of History, School of Distance Education, University of Kerala. He has completed his M.A in History with First Class and First Rank and qualified the UGC National Eligibility Test. He took his PhD from the University of Kerala in 2007. A recognised research guide of the University of Kerala, he has produced two PhDs and supervising eight research scholars at present. Having 20 years of teaching experience, he has been carrying intensive research along with teaching and extension activities. Selected as the Best programme Officer of the National Service Scheme,University of Kerala in 2008, currently he is functioning as the Programme Coordinator of the National Service Scheme, University of Kerala. He has been awarded one UGC Minor Research project and Major Research Project. He was also awarded the Post Doctoral fellowship for the modification of the PhD thesis by the Kerala Council for Historical Research. He has to his credit several research articles in reputed journals, edited books and paper presentations and invited talks in National and International conferences and seminars.