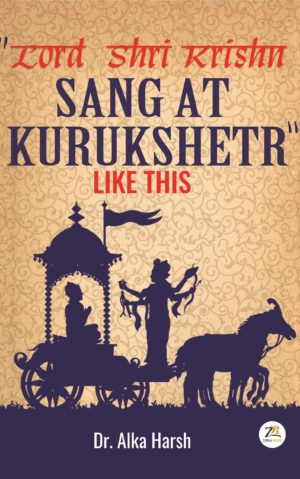 Lord Shri Krishn Sang at Kurukshetr Like This,
Read out loud
or
sing it out for yourself
or for others to listen
and
in any way enjoy

The imperishable Supreme Lord’s Song
Who sits in our hearts as Offering Ritual
Himself sang It to enlighten us of compassion.

Dr. Mrs. Alka Harsh (Km. Alka Agarwal) after having acquired M.Sc. from Lucknow University, did her research work for Ph.D. from NBRI while teaching Botany at the same University’s affiliated P.G. college named Navyug Kanya Mahavidyalay.
While writing research papers she developed interest in writing and penned down various short stories, novels and children’s stories etc. She was inclined towards self-knowledge since 2012 when she saw Lord Mahakaleshwar in Ling Form at the door of Kedarnath temple before dawn. It was as if He had appeared for a few seconds to indicate the massive hazard in the near future. Because right after one year of the incidence, from musk deer forests to Rudr Prayag a natural calamity brought an irrevocable chaos. Heavy rains due to sudden cloud burst caused uncontrolled land slide. Myriad villages swept away and innumerable lives lost including people, flora and fauna.
Then after Alka ji studied Sunder Kand ( a chapter in Ramayan), for the first time. And the very next morning she got blessings from Ram’s devotee and Shiv’s eleventh heir Hanuman Himself, in the form of a long air blow from
Him in her ear.
As a result in flew God’s compassion, which lead her to do research on Ramayan and Geeta. One of the resultant fruits of this research is in your hand in the form of LORD SHRI KRISHN SANG AT KURUKSHETR LIKE THIS.