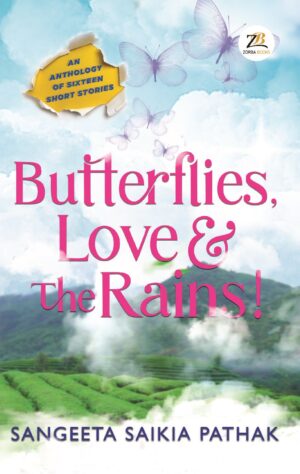 An anthology of sixteen award winning stories, short stories by Sangeeta Saikia Pathak is all about the varied human emotions ranging from love & romances, family drama & intrigues to the terror let loose by gunshots and slogans reigning in the air during the crucial hours of agitations (andolaan) from her homeland, Assam!!!

With her award winning stories based mostly in Guwahati, Assam there are some vivid references to the natural beauty of her place like the majestic waters of the river Brahmaputra, the tea-gardens of Upper Assam, the Kamakhya Hills, the Kaziranga National Park, the premier college and Universities of Assam besides the overcrowded market places like Fancy Bazar, Maligaon and Uzanbazar….

From celebration of friendships…. to heartbreaks…. the trauma of childbirth after marriage…. a grandmom’s untiring efforts to raise her grandson well…. a woman writer’s block…. to the hush-hush topic of lesbianism, Sangeeta Saikia Pathak makes an attempt to explore the subconscious states of a woman’s psyche during the different stages of her life !!!.

Sangeeta Saikia Pathak hails from Assam, the North-East India. A post graduate in English Literature from the Tezpur Central University, Sangeeta Saikia Pathak has been writing poems, short stories and articles since her graduation days in English Literature from Cotton University (the erstwhile Cotton College), Guwahati. Her poems and articles were published widely in the leading dailies of Assam in the first decade of this century. She also holds a Diploma in Journalism from Cotton University, Guwahati and joined the Government of Assam after a brief stint as a sub-editor in the leading
daily The Sentinel. Recently in 2021, Sangeeta Saikia Pathak has received a Certificate of Honourable Mention from the Selection Committee India’s next Big Writer (INBW) for her short story “Butterflies, Love & the Rains!!!”

Be the first to review “Butterflies, Love & the Rains”