A historico-political retrospection of deeds of SINGLE EYED MAHATMA - ZorbaBooks 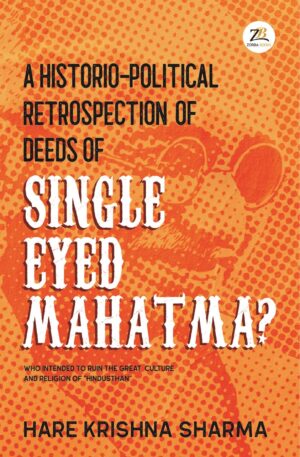 A historico-political retrospection of deeds of SINGLE EYED MAHATMA

Bharatvarsh consisted of today’s India, Afghanistan, Pakistan, Nepal, Tibet, Bhutan, Bangladesh, Burma and SriLanka. Britishers partitioned this nation from time to time with the last jolt in 1947 by creating West and East Pakistan based on 2 nation theory accepted by the Congress leaders Gandhi and Nehru against the wishes of Hindu majority. The partition was made on the basis that Muslims wanted their own separate country. Hence all Muslims should have gone to Pakistan and all Hindus should have come to Bharat. However, Nehru-Liyaquat Pact permitted 3 crore Muslims to stay in Bharat. While Pakistan declared itself an Islamic country and persecuted the Hindus staying in Pakistan and reducing their strength from 22% inn 1947 to 2% in 2021, Bharat did not declare itself Hindu Rashtra resulting into burgeoning of Muslim population in Bharat from 3 crore to 35 crore.
There were several countries in the world which were in the same or even worst position in 1947 including Britain itself, France, Germany, Japan, Israel, China, Korea, Spain, etc. All these countries except Bharat have become developed countries now unlike Bharat which is limping for development.
Did we really get independence? Why are we facing insurgencies, communal riots, engineered unrest, protests and strikes? Rampant corruption? Divisive forces? Why nonplan expenses are more than plan expenditures?
The foundation of the independence of our country has been made on wrong premises and gospels. It is utmost necessary to go to the root causes of the prevailing circumstances.
धर्मो रक्षति रक्षितः

Hare Krishna Sharma was born, in Gokul, District Mathura. He is a Sanskrit scholar, has deep knowledge of Vedas, Upanishads and Puranas. He has profound knowledge of ancient Indian History. He is a renowned Astrologer. He makes very accurate predictions based on Bhrugu-Sanhita and other renowned vaidik granths available. He is the founder of ARSH JYOTISH ANUSANDHAN KENDRA.
He has written several books on national and religious issues. His latest book SOORPANAKHA’S SHIV-VENERATIONN has been published in English, Hindi and Gujarati.
At the age of 82, he is very active in writing on current affairs with nationalistic flair. He is the founder of HINDU RAASHTRA NIRMAAN MANCH. The organization has a large following.
The current book is not his last. A few other books are on the writing table on various issues concerning the nation. He is deeply concerned about the sorry state of affairs prevailing in the country. He is not a silent spectator and strives to contribute to the society. He does not mince words, does not believe in being politically correct and is a forthright unambiguous fierce writer and speaker.
Read more books