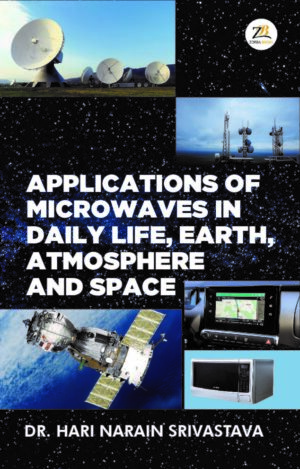 Applications of Microwaves in Daily Life Earth Atmosphere and Space

Applications of Microwaves in Daily Life, Earth, Atmosphere and Space

This book covers various aspects of microwaves in our daily lives, earth, atmosphere and space.  Radars emitting microwaves were widely used since World War II to detect enemy ships or aircrafts but the advent of satellite era has demonstrated their wider applications. The most popular usage of microwaves has been in the microwave ovens, mobile phones and industry. This book covers use of GPS systems in cars and other means of transport, by means of navigation systems for land, air and sea and electronic warfare  to target enemy positions precisely. Some aspects of diagnosis and treatment of certain  illness have been brought out in addition to applications in weather forecasting, tracking of cyclones through satellites and evacuation of people from the  cyclone affected regions due to strong winds, storm surges and floods. This book also describes early warning systems for earthquakes and tsunami besides, volcanoes, landslides and glaciers.  Microwave application in space research has been made for communication between earth and space ships  with a view to know more about planets, moons and other celestial objects. Detection of microwaves in the background of the sky has supported Big Bang theory for the creation of universe. Microwaves are however, sometimes hazardous and need mitigation as described in the book.  It has been written in simple language so that it can be easily understood by  general public. While applying laws of physics, wave propagation or other subjects like earthquakes, volcanoes or weather  due weightage has been given to the NCERT text books on Science and related subjects.

Dr Hari Narain Srivastava ,MSc, PhD  took his doctorate in Microwave Physics from Lucknow University in 1963. He joined India Meteorological Department in 1959 and rose to the post of Additional Director General ( Research). He  was also deputed to the Indian Air Force and later to the  Ministry of Science and Technology as Director, Earth Sciences. He published more than 210 research papers in Microwave Physics, Seismology and Meteorology. He is the author of 12 books on the above subjects by reputed publishers like National Book Trust, New Age International, Raj kamal Prakashan , Ministry of Earth Sciences, Department of Science and Technology and Indian Meteorological Society. He won several national and International awards from the Ministry of Steel and Mines, Ministry of Human Resource Development, Ministry of Environment and Forests ( now climate change also), Uttar Pradesh Government, International Symposium on Natural Hazards at Italy and Bulletin of Indian Society of Earthquake Technology, Roorkee. He served  in several International and National Committees like International Association f Seismology and Physics of the Earth’s Interior,  International Lithosphere Program, World Meteorological Organisation, United Nations Framework Convention of Climate Change, Bureau of Indian Standards and many others. He was deputed to several International Seminars and meetings in Seismology, Meteorology including Climate Change.