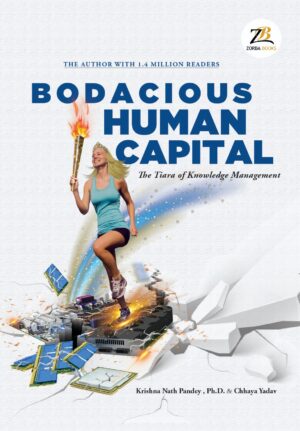 The Tiara of Knowledge Management

This book provides an overview of the authors’ thoughts and perspective on Human Capital. Human Capital may be defined as the sum total of attitude and skills required for accomplishing a task that comes into existence because of education , exposure and experience . The Human Capital is  part of Intellectual which is the most important part of the three components of  Intellectual Capital  and the rest  two are known as Structural or Organizational and Social Capital  .  The management of Human Capital  is dependent on , and; is an integral part of the Knowledge Management coupled with emerging field of Wisdom Management .

This book is an endeavor to trace the interrelatedness of the Human Capital as a part of Knowledge Management (KM ) as depicted  in Rigveda ( ‘Ved’ means Knowledge ) and is  in consonance with the latest trend of KM as on date .  Though the Indian i.e. oriental thought , as envisaged in Rigveda has delineated the KM under Shruti Tradition depicting the mantra of KM which is described in  1.81.1 . In a way,  knowledge was recorded during C. 1500-1200 BCE which is known as Rigveda ; but the same was relegated to the oblivion till Ralph T.H. Griffith  translated Rigveda into English in 1912 subsequent to its earlier  translation into German in  1845 by Max Muller . The usefulness of this ancient KM into the modern KM as propounded by   IT Companies in 1996 onwards  led by the successful implementation of KM in Microsoft, and  it started ; a chain of KM as an effective tool for optimization for   C – Suite executives in corporate world across the globe. This new form of KM has been implemented by almost all the modern organizations .This book is an attempt to pinpoint the ways , tools , drivers ,in addition to ;  the skills required by the managers in implementing KM in an organization in 21st Century besides underlining the prominence of Human Capital as an eternal source for remaining at the pinnacle .

Krishna Nath Pandey is a pioneer in the field of KNOWLEDGE MANAGEMENT in India. He is currently working as a Dean in the School of Management Sciences, Lingaya’s Vidyapeeth ; NCR , Delhi . He also specializes in the area of HUMAN RESOURCE MANAGEMENT. Back in 2017, he served as a General Manager ,the C-Suite Executive of Human Resource Development of POWERGRID. His book titled “Paradigms of Knowledge Management : With Systems Modelling Case Studies” by Springer (2016) is his Magnum Opus . Krishna Nath Pandey holds three Graduation degrees in the fields of Management, English Literature, and Linguistics.

He is a recognized media personality, having huge “viewership ” ( Readers ) on crowd-sourcing platform QUORA and has amassed prolific Digital Real Estate having a huge number of followers in the domain of Intellectual Capital .

He has also written two more books :
• Contemporary Conviviality of Trade Unionism: Perspectives from the Power Sector
• Trajectory of Transmission for Renewable Energy : An Inclusive Case of India

Chhaya Yadav is an alumnus of Bharati College, University of Delhi, where she completed her undergraduation with specialization in Psychology. Subsequent to her degree, she worked as a Research Assistant under the tutelage of Prof. Krishna Nath Pandey. She had been assisting in collecting, collating and confiding data for his research work and her outstanding performance was recognized by all alike in the research team.
In order to have a deeper understanding of the business world, she functioned as an Executive Assistant to the CEO of a start-up, namely; SENPIPER TECHNOLOGIES INDIA PRIVATE LIMITED. The importance of data management post digitization took her to INDIRA GANDHI NATIONAL CENTRE FOR ARTS where she completed one year post-graduate diploma in this field. Chhaya had pursued a half-yearly online course in “Fundamentals of Neuroscience” from Harvard University in 2020. Besides being a co-author, she is aspiring for her M.A in Forensic Psychology in the U.S.A in Spring 2021.

Be the first to review “BODACIOUS HUMAN CAPITAL”