Are you living the biggest scam called money? Demonetization and after - ZorbaBooks 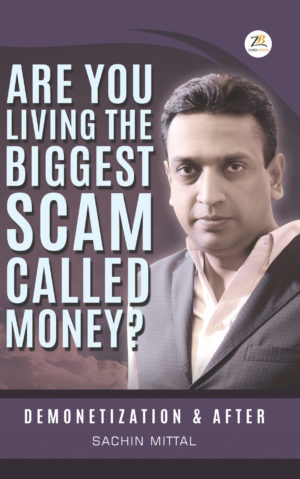 Are you living the biggest scam called money? Demonetization and after

Are you living the biggest scam called money? Demonetization and after

In the current day and age, currency is considered as money that forms the basis of all our transactions. But what happens when we realize that these pieces of paper are nothing but deception? What if, one day, out of nowhere, we are told that these currency notes are as good as paper?

As scary as it sounds, this scenario is not very far from the truth. On 8th November 2016, the citizens of India were faced with a similar predicament. It was the day when the government of India declared 86% of the currency worthless unless exchanged for new currency notes.

An expert on financial matters, Sachin Mittal takes us through the seemingly complex matters on a variety of topics that explain one of the most basic questions of our existence: What is Money? Through deft use of examples, Mittal draws a timeline of the various forms of money used for transactions since the existence of civilization to date. Finally, he delves into the origin of money as we know it, the paper currency.

The author does not wish to pass a judgement on the factors that led to demonetization, rather raises serious concerns regarding the validity of paper currency as a widely accepted form of money. Moreover, through nuanced argument and examples, he demystifies the concept of money and reinstates the faith in gold as a more reliable form of money.

With his revolutionary thoughts and actions, Sachin Mittal has been transforming the way financial investment is looked upon in the new age.
He acquired this revolutionary outlook after having worked for a decade with ICICI Bank as their Corporate Channel Partner and also with different NBFCs.
During his tenure, he developed a stupendous portfolio of approximately Rs. 5000 crores of retail home loans. Many in those days believed that he had become larger than the bank itself.
It was during this journey that he came in contact with the bigwigs of the financial and corporate sector, and this gave him insight not only into how people acquire wealth but also how they lose it.
He was quick to realize that traditional financial processes were not built for the modern business economy. Therefore, he embraced more strategic, agile and responsive financial investment modules, in line with the changing times.

Be the first to review “Are you living the biggest scam called money? Demonetization and after”