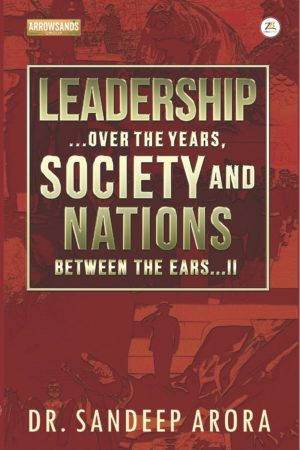 From the raw and physical tribesman, to the majestic kings and sultans. From the later, tough and rugged military generals of state armies,
statesmen, public figures, to an era of strong, opinioned iconic writers, composers and speakers. To the recent times, when leadership is represented by equally cerebral men and women, the society and leadership has evolved a full circle.

Through Leadership….over the years, Society……………..Dr Sandeep Arora, culls the finer, subtle and recent quirky undercurrents which have shaped and defined leadership through the ages. The society witnessing changes wherein the well defined and written norms are rapidly being turned upside down.  Masculine and feminine terrains are getting blurred, and the normal is being redeciphered as the new abnormal and vice versa.

While some events in these evolutionary changes have been defining moments, others and particularly the recent trends edge on the
lighter and sometimes hilarious. Organisations, states and countries adapting behavior patterns based on the new, sometimes bizarre, sometimes cool and often whimsical leadership behaviours from those up who are steering the boat.

This book on leadership also tries to capture the awe inspiring creative world of writers, musicians and public figures. These people have raised the bar of human, spiritual and social life through their immaculate, enthralling and soul stirring works.

Dr Arora talks about leadership and book publishing  in this video

Dr. Sandeep Arora has been a Technical Pharma professional for the past 26 years. His  publications are “Pharmaceuticals: Issues for Industrial management.” He was the editor for 5 years to “Advance Drug Review-ADR,” 90 national and international scientific papers and 15 patents in pharmaceutical research. He is an admired Professor and Director, involved in developing quality Pharmaceutical and academic institutions of national excellence. He has also worked in Operations and QA Executive in multinational Pharma Companies including Glaxo I Ltd, Nicholas Piramal, and others. He has four registered Trademarks and a Company.

For more books on leadership

Watch the video teaser for this book

Be the first to review “Leadership, Society and Nations”