Untold Stories Of The Exodus - ZorbaBooks 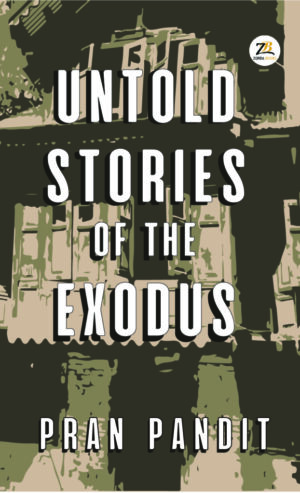 Untold Stories Of The Exodus

Untold stories
Of
The exodus

“Mass exodus of more than three hundred thousand Kashmiri Hindus, the religious minority of Kashmir, in the year 1990, is reminiscent of the plight of millions of people who were rendered homeless at the time of division of united India in 1947. Despite lapse of more than three decades, the internally displaced persons (IDPs) from the valley of Kashmir continue to live as refugees in their own country!
The book seeks to acquaint the readers with the machinations and maneuvers of the villains of peace, for causing destruction of human life and property in the peaceful valley of Kashmir, and coercing en masse departure of the locals from the land of their forbearers.”

“The eruption of terror in Kashmir was not an abrupt phenomenon it had been ‘in-the-making’ for years and decades. It can be said with unmistakable clarity that ‘Terror in Kashmir’ was a measure of the penetration achieved by extremist and separatist elements in creating a
broad base for Jehad; and what appeared  improbable, did happen in late 80’s. The political establishments did not recognize the trouble brewing in the valley of Kashmir even after the horrendous incidents of subversion and sabotage in 1988 and 1989. The manner of dealing with the crisis situation lacked seriousness; and they utterly failed to fulfill their constitutional obligations.”

Pran Pandit, aka Pran Nath Pandita, joined J&K police, as a probationary officer, in May, 1970, at a young age of 20, and retired as Superintendent of
Police in December 2007. Pran Pandit, a former police officer, is the recipient of a number of awards including the coveted ‘President’s Meritorious Services Medal’ and ‘DGP’s Commendation Medal’. He has sojourned the entire Kashmir province including Ladakh, and is well versed in topography,
demography, sociology, and political nuances of the region. All through his service career, he stood for cultivating cordial ‘Police-Public relations’, essential for maintaining law and order and enforcing the laws. In spite of his engagements in multifarious Police duties, he made valuable contributions to the success of various initiatives of J&K police for police-public interface, which included the ‘Civic Action Program’, ‘police-public welfare Melas’, Sports and Cultural activities. His active participation in extra police activities enabled him to hone the qualities of leadership, event-management, and sportsmanship; and he grew up into an anchor/commentator. Pran Pandit was assigned the task of Executive Editor, ‘Monthly News letter’, the mouthpiece of J&K police, and other publications including journals and souvenirs etc. Working in this field for about a decade, he received appreciations and accolades, and grew into an accomplished editor.
Pran Pandit has impetuous passion for art and creativity including film making, and he has established himself as a Script and screenplay writer for
Television and Radio. His works include ‘Andha- Safar’, ‘Beegha- ghoungat’, Television Films, ’Kashmir’, a docu-drama, all three in modern Indian
language, and ‘Hearisaath’, a TV Serial in Kashmiri language, and a host of documentaries including the series of ‘Dos and Don’ts for Swami Amaranth
pilgrims’, which brought him applaud from the viewers. He is a regular contributor of All India Radio and besides ‘talk shows’ and ‘Radio plays’, he has
produced a radio feature titled ‘Evolution of Drama in Kashmir’. Pran Pandit is the Managing Director of ‘VS Vision Pvt. Ltd’, a company registered under the Companies Act, engaged in promoting Art and literature. He has a passion for writing, and has been contributing to various ‘English
Dailies’ in the form of ‘Articles’ on burning topics, besides reviewing the published books.

Be the first to review “Untold Stories Of The Exodus”