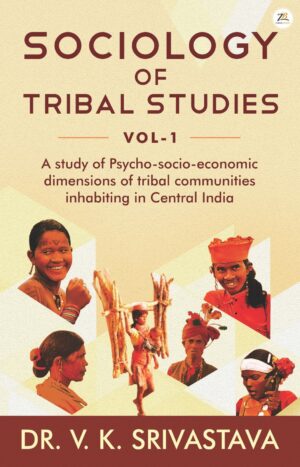 This book `Sociology of Tribal Studies` is a compilation of six empirical studies done from time to time on the various aspects of living socio-economic conditions of tribal communities inhabiting Central India, especially in Madhya Pradesh and Chattisgarh. The tribal regions of these two States adjoin the tribal regions of seven border  States viz, Andhra Pradesh, Uttar Pradesh Jharkhand, Orissa, Maharashtra, Rajasthan and Gujarat. Therefore, both the States have a substantial representation of tribal groups of Central India having 52.51 per cent (2001) of the total tribal population of India. This book covers the following topics on tribal studies:

Dr.Vijay Kumar Srivastava, M.A. PhD. (Sociology) born in Jodhpur(Rajsthan), who has served as Dy.Commissioner in the State Tribal & Scheduled Caste Welfare Department, Government of Madhya Pradesh and as a Director, National Commission for Scheduled Castes & Scheduled Tribes,
Government of India.
He had been Fellow to Indo- German Social Societies (IGSS,2003-04). During this period he studied Issues of tribes of Western Madhya Pradesh with reference to Jhabua and Dhar districts. Several other studies are also at his credit. As regards the publications, Tribal Scenario of Madhya
Pradesh(2003),Pahari Korwas and their Development-A Monograph(2007), and three Hindi Poetry books.

Be the first to review “Sociology of Tribal Studies Vol 1”