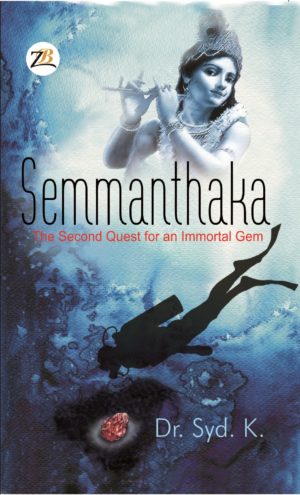 A Fiction Book based on Hindu Mythology

“Mother-lode da puttar, I have a feeling that this is going to be one heck of a treasure hunt!”
Renowned marine archeologist Dr. Balaan and his associate Yogi find themselves on an unusual mission when billionaire collector Stalin Malhotra hires them to find the most legendary gem in Hindu mythology – Semmanthaka. As excavations off the Saurashtrian coast begin to reveal that Krishna’s Dwaaraka existed, Stalin believes that the Semmanthaka must exist too and what’s more, he has a clue in hand.

Thus begins the second quest for Semmanthaka – a gem so brilliant that it can make you richer than Kubera; a gem so cursed that it brings death and disaster to all who covet it. Soon, Dr Baalan and Yogi find themselves thrown headlong into an action packed, life-changing adventure that ranges beyond treasure hunting, beyond this realm, beyond their own current incarnations, in a race against time to save our very planet and uncover some of the greatest secrets of Bhaarath-varsh and a great spiritual truth. One can only find the Semmanthaka when one does not want to.

The clock is ticking. As the forces of Adharma gather, can Dr Balaan and Yogi stand the test of faith or will they too succumb to the lure of Semmanthaka?

The author is a Professor of Pharmaceutical Chemistry at a College in the South. He has published many scientific articles in his field as well as very well received articles in the field of Higher Education. One of his recent articles on Higher Education appeared in the prestigious NATURE ASIA. He has also authored popular articles, blogs, and short stories on a variety of topics. Prior to this work, he has also published four books of fiction. The author is also an avid musician and performs professionally and has a passion for chanting complex Vedic Hymns. He also dabbles in online flight simulation and passionately trains in the Mansuria Kungfu form of martial arts.

23 reviews for Semmanthaka: The Second Quest