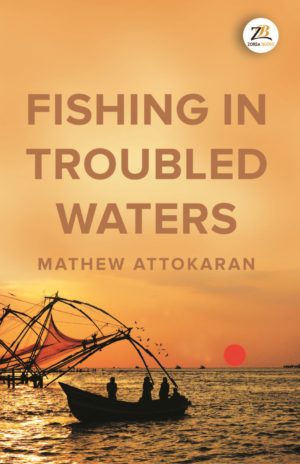 The story begins with a romantic affair between Saravanan, a young Tamilian scientist with a doctorate in fisheries science and Alice, a Malayalee medical student in the beautiful city of Mysore, culminating in marriage.

Soon the marriage faces trouble as Saravanan, gets drawn into a casual affair with a junior woman scientist. This leads to a steamy sexy night, while on tour in the picturesque research station in the southern tip of India.

Matters become complex, with two murders taking place in a  boat doing fishing in the outer sea. Will the smart and efficient police officer assigned to investigate the crime be successful in solving the crime? Will he expose the sinister activities that are going on? Will Alice’s maternal ambition bear fruit? What will be Dr Saravanan’s prospects? Will he attain the top position in the research institution? Will he be able to overcome the tide of murky politics?

The backdrop of the story is the lively port city of Cochin. The city has emerged as the export hub for seafood in the country.

The story unfolds with plenty of twists and turns, which will keep the reader tightly glued to the book, besides giving interesting information on seafood and fisheries technology.

Dr Mathew Attokaran, MSc, PhD, was born in Kerala in 1935. He is primarily a scientific researcher in the area of food and flavour technology. His team’s development of an improved process using an innovative two-stage method has resulted in India becoming a superpower in the manufacture and export of spice oils and oleoresins. He has won several national awards including the prestigious Rafi Ahmed Kidwai Memorial Prize of Indian Council of agricultural Research.
In the course of his long and illustrious career, he was involved in taking lead for a large number of scientific publications, reviews and presentations in various national and international seminars and conferences. He has been a successful columnist writing on subjects of popular science and humour in leading Indian magazines. He is also the author of the 450-page book, Natural Food Flavors and  colorants published by world’s leading science and technology publisher, Wiley-Blackwell, USA in 2011. The book has recently gone into 2nd edition and also a Chinese edition. His highly popular coffee table book, Indian Spices published along with well-known photographer, (late) Salim Pushpanath has come out in several editions including French and German versions. His earlier novel, A Harvest of Ecstasy was published in 2015.

Dr Mathew Attokaran is a keen reader of fiction and has travelled widely around the globe. He has a great interest in seafood and bridge game, both of which find a place in the novel. At present, he lives in Cochin with his wife. They have two daughters and five grandchildren. He can be reached at mathatto@gmail.com

Be the first to review “FISHING IN TROUBLED WATERS”