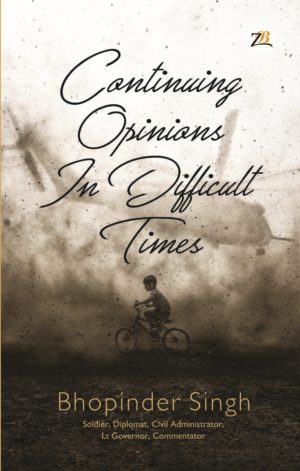 The following collection of articles are a reflection of the unique and inspiring perspective of a soldier, Bhopinder Singh. He has served in the Indian Army, and also acted as the Military Secretary to two of the foremost Presidents of Independent India – KR Narayanan and A.P.J. Abdul Kalam. These articles deal with matters of a political, military, economic and psychological nature. They are written not only through an intellectual lens, but through the prism of experience. These articles are interspersed with anecdotes from the personal life of the author.  They draw upon all that he has witnessed, and partaken. These words take the reader through a journey filled with dragons, fighter jets, newsroom warriors, and even, Sufi saints.

They are a celebration of the human spirit, and an invocation for the betterment of society and of the world that we inhabit. Although, the topics that find mention, are often filled with suffering and bleakness, the element of hope is ever-present. He veers away from the pit-falls of gross over-simplifications. The author delves deep into the topics he has chosen to write about. Bhopinder Singh offers a nuanced and conscientious approach to a wide range of subjects. Topics not only comprehensive and varied; they are also extremely relevant given the current hyper-nationalistic word-view. The author seeks to remind his readers about the importance of critical engagement and multiple perspectives. He appeals that the spirit of “cooperative federalism” be considered as paramount in these trying times.​

Lt Gen Bhopinder Singh (retired) PVSM, AVSM is the former Lt Governor of Andaman & Nicobar Islands and Puducherry. In his Military career spanning over 40 years he has fought the 1965 & 1971 wars. He has served extensively in J&K and North East, was posted as the Military, Naval & Air Attaché for East & South Africa. Bhopinder Singh was also the Military Secretary to the Presidents of India, Shri KR Narayanan and Shri APJ Abdul Kalam.

He was commissioned in 1965 into the famous 17th Battalion (‘Barhe Chalo’) The Rajput Regiment. He commanded the same battalion and was also the ‘Colonel of the Rajput Regiment’. A soldier with multiple combat experiences, diplomatic tenure, service with two former Presidents of India. Later becoming the Lt Governor of two Union Territories – he has a wide experience and perspective on matters concerning national, security and geopolitical domain. Regularly shares in his prolific ‘third innings’ of his career i.e. by writing and contributing articles for leading newspapers of the country. His book Bayoneting with Opinions is widely available on online stores and worldwide including library of Congress(US)