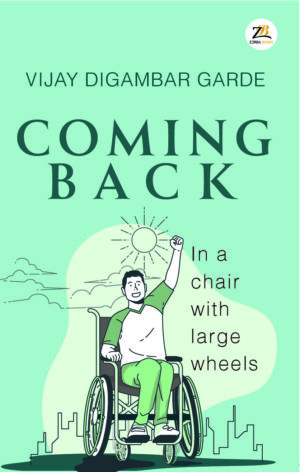 Coming Back, narrates a slice from Vijay Garde’s life. An up worldly mobile lifestyle, healthy and vibrant young family man on a deputation abroad to a sudden turn of events that land him in a wheel chair. Transforming experiences, medical treatment, an uncertain career, a life of self-reliance to a dependent life. Absorbing narration and endless twists and turn, an inspiring book.

Vijay Digambar Garde graduated with honours from the Govt. Engineering College, Jabalpur in 1958 and joined as a Graduate apprentice at Bhopal Plant of HE(I)L. He was sent to the Moscow Power Institute ,Moscow, where he did a Ph.D. in power systems engineering in 1968. He worked at Bhopal and at the Corporate Office of BHEL in New Delhi. He also worked on the expert panels of the UNEP in New York and Nairobi in 1975.

In March 1977, while being on deputation from the Govt of India to Govt of Libya, he sustained a spinal cord injury. After rehabilitation he returned to India and worked at the Corporate office in New Delhi and later at the Bhopal plant. He was the General Manager at the Bhopal plant in 1990-94 and then as adviser till May 1995. After retirement he worked in the IT Industry and was associated with a large number of research and academic institutions.

Among other recognition awards, he was awarded the Pandit Lajja Shankar Jha Award and  Life Time Achievement Award by the Computer Society of India in Bhopal.

Be the first to review “Coming Back”