Set Your Sights On Highs - ZorbaBooks 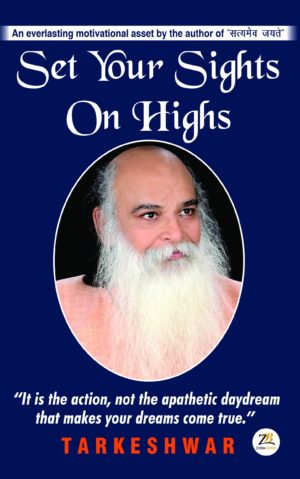 Set Your Sights On Highs

​A young person​ ​faces this world with the belief that ​he/she is the best. Nevertheless,at times, he is haunted by the ​thought​ that maybe ​the ​ soul of righteousness is missing ​in him.  This​ ​void gradually puts him at a disadvantage, he experiences unease and may cause disorientation. How to maintain orientation ​and grow ​this is what
the book is all about​. It will:

– help the youth do their best, to scale the highest heights and to get the best version of themselves,​ that they are capable of.
– teach the young to tap hidden resources ​present within them ​selves​…
– motivate​ the young, a motivational book second to none…
–  guides ​the youth to internally engineers themselves, the book is based on research…
–  pragmatically teach what most parents fail to​ teach…
– ​provide a key to open the treasures of a youths; latent volitional powers

Tarkeshwar (popularly known as Siddhyogi Swami) was born on 13th September 1953, at Aurangabad, Distt. Bulandshahar, U.P, in a reputed Brahmin family. He is the eldest son of late Smt. Rajkali Devi & late Sri
Madan Lal Sharma and the eldest grandson of late Shri Krishana Murari Shastri, a famous freedom fighter from Distt. Bulandshahar U.P. He is a science-graduate from Meerut University. His first novel ßlR;eso t;rsß was published in 2012
The novel was released at Marwah Studios Complex, Film City, Noida, U.P. by Sri Sandeep Marwah. Besides being an educationist by profession, he finds himself a religious person by heart, a visionary by instinct, philanthropist by endowment. He has complete faith in secularism and the composite culture of India.
He is the founder of Siddh Yog Sewa Sansthan, (a non-government organization working for Health, Education & Peace; associated with ‘World Peace Development and Research Foundation The Republic of India’. He is a member of ‘International Film and Television Club’ (affiliated to International film and television research centre) Marwah Studios Complex, Film City, Noida, U.P.

Be the first to review “Set Your Sights On Highs”