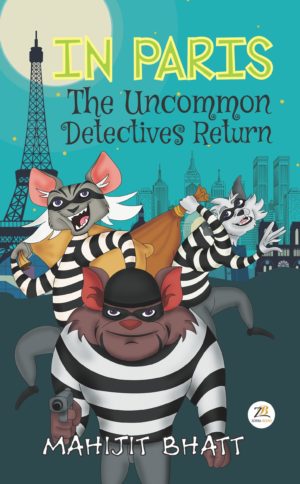 IN PARIS– The Uncommon Detectives Return

The Uncommon Detectives are summoned once again to catch their arch enemies who are on the run. The villains are planning to carry out evil acts. Nick, Francis and Simon embark on a journey away from their homeland to save one of the most precious works of art, in the world. They begin a whirlwind journey in which they are betrayed and have to face new challenges to save their dearest colleague. The encounter is full of action as they are plunged into new battles where they are forced to take up gaming challenges and that too in alien territory. To make things worse, the enemy now has a new Boss who owns the sky. He can easily bring down our heroes with his furious attack. Our heroes cannot lose hope and will have to search within themselves for inspiration to bring the villains down. Read the book to see whether they will succeed or fail.

Note: All the characters in this adventure story book are animals and birds portrayed as if they are humans.

Mahijit is currently 14 years old and wrote his first adventure book at the tender age of 11 years –The Uncommon Detectives. For the said book he has received many accolades like publication of articles in magazines. He was also called for a personal interview on Radio Mirchi for it. The book has been appreciated world wide even on portals like goodreads etc.
This book is a sequel. Mahijit has a penchant for reading and creating characters and stories. He has his own YouTube channel ‘Mahijits Funhouse’. He loves to watch animation and can write about anything. He is a big fan of Harry Potter series and Pokemons and can speak about them for hours.
More Adventure books for children

Be the first to review “IN PARIS– The Uncommon Detectives Return”