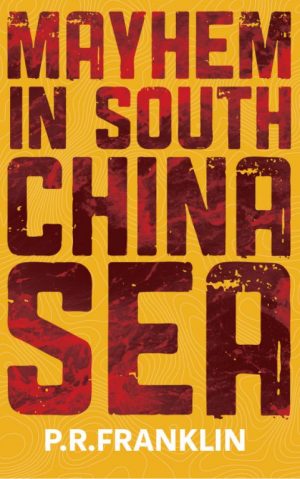 Mayhem in South China Sea, plays out a very real scenario by a naval expert, in the form of a fiction book. China is actively converting the South China Sea into its exclusive backyard. Neighboring littoral states helplessly watch with muted protests.

Franklin a former naval officer(Commodore) pens this fiction drumming up a scenario where with backing from the United States, India sets about upsetting Chinese policy of dominance over the region. This book, skillfully lays out how Intelligence organizations, separatists, terrorists with lethal weapons,and covert naval forces, carry out an attack on the island of Hainan with the aim of neutralizing its effectiveness. Using his deep knowledge of warfare and tactics the scenario feels so real keeping one on tenterhooks and involved, right till the last.

Will the two nations be able to limit the expansionist China?

What are the repercussions of this bold step?

PR Franklin was awarded the Vishisht Seva Medal in 1995 and the Ati Vishisht Seva Medal in 2001 by the President of India.
Born in 1946, Commodore PR Franklin did his initial military training in the National Defence Academy, Khadakvasala, and joined the Executive Branch of the Indian Navy in 1965. He was one of the pioneers who trained in the USSR for submarines. He subsequently commanded two of them.

A graduate of the Defence Services Staff College, Wellington, he subsequently served there as Directing Staff. He is also a graduate of the Marshal Grechkov Academy in Leningrad (St.Petersburg), where he did his Higher Defence and Staff Course.

Among his many appointments in the Indian Navy, he served as the Director Submarine Operations in Naval Headquarters, as the Naval Assistant to the Chief of the Naval Staff, as the Naval Advisor to the High Commissioner of India in London, and as the Naval Officer-in- Charge Tamil Nadu and Pondicherry.

After retirement from the navy, he worked as a Consultant for a private company to produce a Motion Control Simulator for India’s first indigenous nuclear powered submarine, INS Arihant. Commodore PR Franklin lives with his wife in Bangalore. They have two married children and two grandchildren.

His e-mail id is: jalvayufranklin1946@gmail.com

Be the first to review “Mayhem in South China Sea”